by Leila M. & Tired of Triangles 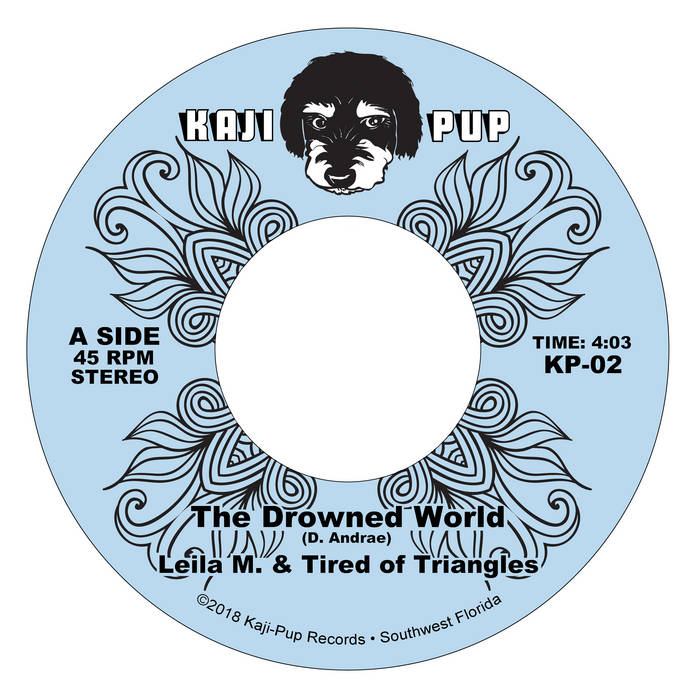 [Note: This release also available from the Tired of Triangles Bandcamp page.]

Kaji-Pup Records hits the ground running in 2018 with its keenest release yet! Behold: a split 7” with Leila M. & Tired of Triangles laying down a Ballardian soundscape on one side, and Tired of Triangles ripping through a fuzzed-out rock song with post-punk and psychedelic leanings on the other. Tracked before and after Hurricane Irma hit Florida and the surrounding areas, “The Drowned World” b/w “Z.F.G.” carries with it an unmistakable resilience, a sense of finding artfulness and purpose in uncertain times. Here an upgrade in recording gear has yielded a pair of songs with higher fidelity. The music is also more fleshed-out and refined, perhaps rendering this slab of wax an example of a label and two of its bands hitting their stride.

An homage to the J.G. Ballard book of the same name, the A side, “The Drowned World” by Leila M. & Tired of Triangles, evokes the mounding paranoia and panic of its storyline. In Ballard’s second novel the year is 2145 and much of civilization has been phased out and submerged under water. The remaining land masses have become dominated by reptiles and increasingly oversized insects inhabiting jungles and lagoons where thriving cities once stood. For the few humans that do remain, it’s just a matter of time before the unbearable heat, rain, and humidity at the equator spread further and further outward, forcing them to migrate closer to the nearest pole. It’s here that we find the protagonist Kerans residing alone in his flat near the top of the Ritz Hotel in what was once London, “on the beach” as it were. The book’s atmosphere of encroaching tropical unease is conveyed musically by the interplay of Leila’s pristine Middle Eastern tanbour riff — fed through a stereo delay throughout, tinged with flange toward the end — and Dave’s various distorted guitar parts, percussion flourishes, and eery-sounding string screeches. Everything builds to a slow climax in this deceptively simple composition, “The Drowned World” likely being the most haunting piece of art either member of this duo has had a hand in.

Shifting into higher gear and a more dynamic sense of structure, the B side “Z.F.G.” kicks ass and takes numbers. Whereas the debut Tired of Triangles effort Up at 4 A.M. is a stripped-down low-key affair for blood-shot eyes, this new song is a blast of in-your-face rock that wouldn’t seem so out of place at a club on a Saturday night. Propelled by a simple drum machine beat comprised of a detuned AceTone clave, a TR-909 kick, and a synthetic closed high-hat of unknown origin, “Z.F.G” charges out of the gate with a descending velcro-y fuzz-guitar riff guaranteed to go over well on loud sound systems. In terms of theme the song deals with not caring about petty opinions directed at oneself. It’s an old aphorism of sorts that if someone seeks to undermine a person or group of people but can’t directly control them, he or she will resort to trying to affect how other people see them. This is naturally often the domain of what gets called “psychological warfare,” and “Z.F.G” responds with a simple, defiant “zero f***s given!” Lead vocals on the first verse are handled by Dave, before the song switches gears with a swampy Chrome-like interlude and then returns with a verse lead by guest vocalist Lindsey Charles of Chicago rock firebrands The Cell Phones. Then, just as we’re able to catch our breath, the song breaks into a thumping bass-driven passage, perhaps reminiscent of Leeds, U.K. legends Delta 5. Abstract guitar-noise tremors soon envelope everything in earshot before “Z.F.G.” ends with an acoustic guitar and wah-wah part, as if to remind the listener that this sonic universe is ultimately a welcoming one. Never before has a song on Kaji-Pup had as many moving parts that fit together just right.

We here at Kaji-Pup Records are excited about both sides of this release and hope that, once you hear them, you will be too.


Both sides engineered and mixed by Dave, except acoustic guitar on “Z.F.G.” recorded by Michael Cohen at Signature Sound Recording Studio, Sarasota, FL, and Lindsey’s vocals on “Z.F.G” recorded by Ryan Szeszycki at home in Chicago, IL.

Bandcamp Daily  your guide to the world of Bandcamp